float on any day for only $40 promo code

Flotation therapy provides a unique opportunity for unplugging from the routine and chaos of daily life. Many people dealing with stress or anxiety can find relief in the float tank, but perhaps no group needs that relief more than individuals suffering from PTSD.

PTSD, or post-traumatic stress disorder, is a tragic and sometimes debilitating disorder that can develop after an individual survives a trauma. Feeling fear and panic during a dangerous situation is normal (essentially, that is our fight-or-flight response), but PTSD develops when those agitated feelings and symptoms linger long after the trauma has passed.

What are the Symptoms of PTSD?

These symptoms of PTSD can be incredibly debilitating to leading a full and healthy life, although they can vary depending on the person affected. Symptoms include reliving the trauma during waking hours (accompanied by physical affect like sweating or a pounding heart), experiencing vivid nightmares, and having trouble sleeping. Some PTSD sufferers are constantly tense and on edge, while others become emotionally numb and lose interest in the hobbies and passions that once gave great pleasure(1). 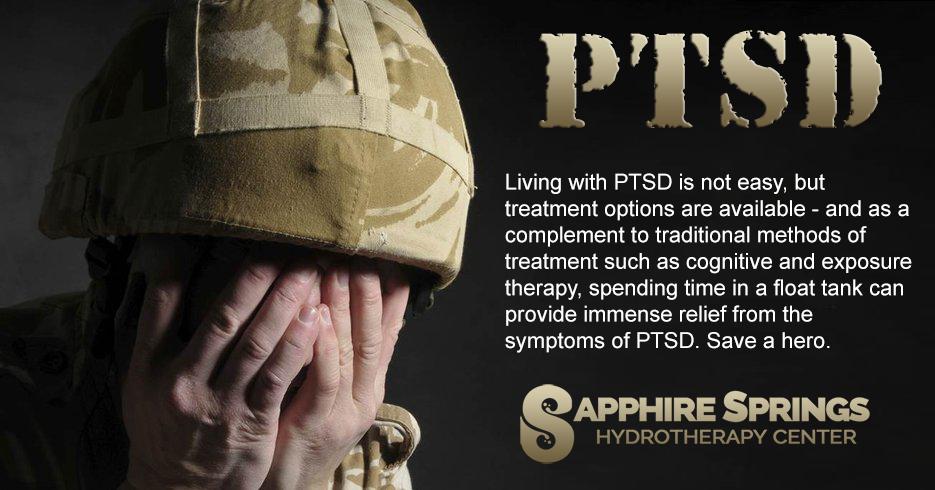 Who Suffers From PTSD?

While the National Center for PTSD estimates that nearly half of all Americans experience trauma at some point in their lives, only 7 to 8 percent of the population will have PTSD. While combat veterans are perhaps the most well-known segment of the population that experiences PTSD, the disorder can also occur when an individual survives a disaster, car accident, physical or sexual assault, or even witnesses a family member or loved one experience danger, harm, or death.

Military veterans, especially those who served in combat situations, are much more likely than the general population to suffer from PTSD. Estimates from the U.S. Department of Veterans Affairs suggest that between 11 to 20 percent of veterans from the Iraq and Afghanistan wars have PTSD in a given year, while approximately 12% of Gulf War veterans experience PTSD in a given year. Studies of Vietnam veterans suggest that approximately 30% of these veterans have experienced PTSD in their lifetime.

How Floating Can Help PTSD

Living with PTSD is not easy, but treatment options are available—and as a complement to traditional methods of treatment such as cognitive and exposure therapy, spending time in a float tank can provide immense relief from the symptoms of PTSD.

First and foremost, floating has a proven track record of reducing stress. Especially for PTSD sufferers who experience ongoing anxiety and tenseness, an hour or two of complete quiet and calmness in a float tank can be an incredible relief.

A person suffering from PTSD often develops one or more related disorders (clinically known as “comorbid disorders”), such as depression, anxiety, or substance abuse(2). Floating can provide immense and immediate relief to many of these related disorders, as well as the chronic pain that many survivors of combat wounds or physical traumas may carry with them years after the initial event.

While treating these symptoms is not precisely the same as treating PTSD, an individual who feels less pain, gets a good night of sleep, and is able to curb unhealthy smoking or drinking habits is very likely to feel better overall—and be better equipped to confront and deal with the trauma behind their PTSD.

Finally, floating can enhance one of the most promising alternative treatments for PTSD: meditation. Multiple studies(3,4) have shown that meditation practice combined with traditional therapy can improve the severity of PTSD symptoms—and there is a growing body of research that indicates time in the float tank makes meditation more accessible and effective for its practitioners.

Flotation therapy has not been part of many studies on PTSD treatment up to now—only one study(5) of one subject has been published in a scientific journal. In that study, a woman suffering from PTSD (along with an anxiety disorder and ADHD) underwent flotation therapy sessions, accompanied by in-depth interviews by scientific researchers. Her experience demonstrated, essentially, that floating helped. The woman described feeling relief from tension and a complete sense of safety that allowed her to relax. She reported feeling more confidence, more energy, and a more positive outlook after floating.

That’s where the scientific research specific to PTSD ends, but where personal accounts only begin. Many military veterans with PTSD have reported finding great relief in the float tank. Here are just a few of their powerful testimonies:

Part of our ongoing mission here at Sapphire Springs is to make floating accessible to the people who need it most. Every year on Veterans Day, we’re honored to provide free floats for veterans and service personnel. Every day of the year, we offer a 20% discount for all active and retired military personnel, law enforcement, and firefighters.

We would love the opportunity to introduce any individual suffering from PTSD to the relief that can be found in the float tank. If you’re new to the idea of floating, please review our Before You Float guidelines for first-timers, take a look at our FAQs, and then feel free to contact us with any remaining questions you might have.

When you’re ready to try floating, you can book online anytime! And if you would like to treat a loved one with PTSD to a float, gift certificates are always available.

WHO IS SAPPHIRE SPRINGS?

Sapphire Springs Hydrotherapy Center is locally owned and operated. We are not a corporate store or a franchisee. Believing that to have somewhere to relax—a refuge to escape from it all—is key to staying grounded.

THIS SITE IS SECURE